Different programming languages are used in Blockchain technology along with cryptographic techniques. Let us see the updates of  the old languages like C++, JAVA, SQL, new languages which is specific for blockchain, SQL to support databases. JAVA plays a key role as it is object oriented, distributed, network based, web based language. The language should support front end, backend and event driven concepts to do the transactions . Data storage and data retrieval is happening in the real time  online mode. Data access must be safe enough in its entire online journey. The Blockchain technology is created using these blockchain programming languages. Blockchain Technology is mainly used for Cryptocurrency.

JavaScript is a high-level, often just-in-time compiled language that conforms to the ECMAScript standard. It has dynamic typing, prototype-based object-orientation, and first-class functions. It is multi-paradigm, supporting event-driven, functional, and imperative programming styles. It has application programming interfaces (APIs) for working with text, dates, regular expressions, standard data structures, and the Document Object Model (DOM).

The ECMAScript standard does not include any input/output (I/O), such as networking, storage, or graphics facilities. In practice, the web browser or other runtime system provides JavaScript APIs for I/O.

JavaScript engines were originally used only in web browsers, but are now core components of some servers and a variety of applications. The most popular runtime system for this usage is Node.js.

Although Java and JavaScript are similar in name, syntax, and respective standard libraries, the two languages are distinct and differ greatly in design.

JavaScript and its libraries and frameworks, like jQuery, React, Angular and Node, is the engine that drives modern web development. Along with HTML and CSS, it surely enhances its features. Javascript is mainly used to create vastly interactive web pages.

Node.js is an open-source, cross-platform, back-end JavaScript runtime environment that runs on the V8 engine and executes JavaScript code outside a web browser. Node.js lets developers use JavaScript to write command line tools and for server-side scripting—running scripts server-side to produce dynamic web page content before the page is sent to the user’s web browser. Consequently, Node.js represents a “JavaScript everywhere” paradigm, unifying web-application development around a single programming language, rather than different languages for server-side and client-side scripts.

JavaScript is a popular programming language and it runs in any web browser with a good web browser. On the other hand, Node. js is an interpreter and environment for the JavaScript with some specific useful libraries.

The developers can refer it in git channel and understand the coding techniques.

React (also known as React.js or ReactJS) is a free and open-source front-end JavaScript library for building user interfaces based on UI components. It is maintained by Meta (formerly Facebook) and a community of individual developers and companies. React can be used as a base in the development of single-page or mobile applications. However, React is only concerned with state management and rendering that state to the DOM, so creating React applications usually requires the use of additional libraries for routing, as well as certain client-side functionality.

React.js is an open-source JavaScript library that is used for building user interfaces specifically for single-page applications. It’s used for handling the view layer for web and mobile apps. React also allows us to create reusable UI components.

TypeScript may be used to develop JavaScript applications for both client-side and server-side execution (as with Node.js or Deno). There are multiple options available for transcompilation. Either the default TypeScript Checker can be used, or the Babel compiler can be invoked to convert TypeScript to JavaScript.

TypeScript supports definition files that can contain type information of existing JavaScript libraries, much like C++ header files can describe the structure of existing object files. This enables other programs to use the values defined in the files as if they were statically typed TypeScript entities. There are third-party header files for popular libraries such as jQuery, MongoDB, and D3.js. TypeScript headers for the Node.js basic modules are also available, allowing development of Node.js programs within TypeScript.

The TypeScript compiler is itself written in TypeScript and compiled to JavaScript. It is licensed under the Apache License 2.0. TypeScript is included as a first-class programming language in Microsoft Visual Studio 2013 Update 2 and later, alongside C# and other Microsoft languages. An official extension allows Visual Studio 2012 to support TypeScript as well. Anders Hejlsberg, lead architect of C# and creator of Delphi and Turbo Pascal, has worked on the development of TypeScript.

TypeScript supports both front end and back end applications, when we use it for front end we need to appropriate frame work(Angular, React.js), for back end we can use Node.js.

Remix IDE is an open source web and desktop application. It  has a rich set of plugins with intuitive GUIs. Remix is used for learning and teaching Ethereum and contract development. Remix IDE is part of the Remix Project which is a platform for development tools that use a plugin architecture. It encompasses sub-projects including Remix Plugin Engine, Remix Libs, and of course Remix-IDE.

Remix IDE is a powerful open source tool that helps you write Solidity contracts straight from the browser. It is written in JavaScript and supports both usage in the browser, in the browser but run locally and in a desktop version.

Remix IDE has modules for testing, debugging and deploying of smart contracts and much more. Remix-IDE is available at GitHub repository. This set of documents covers instructions on how to use Remix. LearnEth located inside of Remix IDE, there you can find additional informations.

Developers are using the Remix IDE to develop the smart contracts.

Created by Microsoft as a substitute of Blockchain coding Java, the OOP language offers a huge number of features for enterprise-powered apps, cloud, and cross-platform development. The language comes loaded with features of C, SQL, and .NET frameworks, and is highly favored for Blockchain development. It is cost-effective to use because of the BizSpark program.

The programming language is majorly considered for building dApps, Smart Contracts, and infrastructure in a Blockchain environment. The smart contracts are written in C# and then wrapped with a web-based front end.

Go is a statically typed, compiled programming language designed at Google by Robert Griesemer, Rob Pike, and Ken Thompson. Go is syntactically similar to C, but with memory safety, garbage collection, structural typing, and CSP-style concurrency. The language is often referred to as Golang because of its former domain name, golang.org, but the proper name is Go.

There are two major implementations:

Some notable open-source applications written in Go include

Although its roots are in telecommunications, Erlang’s unique features and extensive library make it suitable as a general-purpose programming language and well-suited to programming projects such as network servers, control systems and web development.

The Erlang language, together with an extensive library of applications and modules, a virtual machine and operating system, and a set of design principles establishing standard behaviors, comprise Erlang/OTP (OTP stands for Open Telecommunications Platform).

Erlang/OTP is distributed as free software (under the Apache Public License) as well as a commercially supported version from Ericsson. Both distributions run on Microsoft Windows, VxWorks by Wind River, and many varieties of Unix.

Erlang is also often referred to as Erlang/OTP, where “OTP” stands for “Open Telecom Platform”. OTP includes the garbage-collected Erlang runtime environment, many ready-to-use components, and a set of design principles.

Businesses use Erlang to build distributed web applications with fault-tolerance.
Erlang helps to create systems with high availability. This language enables “hot-swapping”, which allows changing the code without stopping the system.

Erlang, along with Scala, are used to power Cloudant’s full-text search system. The system is powered by two complementary projects Clouseau and Dreyfus. Dreyfus is written in Erlang and deals with plugging into existing CouchDB/Cloudant clustering technologies. It manages Clouseau nodes to deliver full-text search features. Clouseau and Dreyfus communicate using Erlang’s external term format (using the Scalang library on the Clouseau side).

Rholang operates with a functional approach over object-oriented. It also assesses the whole app as a series of functions which are then solved in a sequential manner. Rholang to build a high-level project like Smart Contracts.

Created by Russell O’ Connor, Simplicity is one of the high-level Blockchain coding languages that hit the market in November 2017.

The Simplicity programming language is based on Ivy and works with a Haskell-like syntax which makes coding easier and effective. Besides, it is highly mathematical in nature and makes the codeline human-readable. Because of which, it is highly used for developing Smart Contracts and blockchain solutions that works with both Bitcoin and Ethereum Virtual Machine (EVM).

Rust is a multi-paradigm, general-purpose programming language designed for creating a safe concurrency. Rust is syntactically similar to C++, but can guarantee memory safety by using a borrow checker to validate references. Rust achieves memory safety without garbage collection, and reference counting is optional. Rust has been called a systems programming language and in addition to high-level features such as functional programming it also offers mechanisms for low-level memory management.

First appearing in 2010, Rust was designed by Graydon Hoare at Mozilla Research, with contributions from Dave Herman, Brendan Eich, and others. The designers refined the language while writing the Servo experimental browser engine and the Rust compiler. Rust’s major influences include C++, OCaml, Haskell, and Erlang. It has gained increasing use and investment in industry, by companies including Amazon, Discord, Dropbox, Facebook (Meta), Google, and Microsoft.

Rust has been voted the “most loved programming language” in the Stack Overflow Developer Survey every year since 2016, and was used by 7% of the respondents in 2021.

Rust has been adopted by major software engineering companies. For example, Dropbox is now written in Rust as well as some components at Amazon, Microsoft, Facebook (Meta), Discord, and the Mozilla Foundation.

Rustfmt is a code formatter for Rust. It takes Rust source code as input and changes the whitespace and indentation to produce code formatted in accordance to the Rust style guide or rules specified in a rustfmt.toml file. Rustfmt can be invoked as a standalone program or on a Rust project through Cargo.

Clippy is Rust’s built-in linting tool to improve the correctness, performance, and readability of Rust code. It was created in 2014 and named after the eponymous Microsoft Office feature. As of 2021, Clippy has more than 450 rules, which can be browsed online and filtered by category. Some rules are disabled by default.

Some of the other projects are :

The Google Fuchsia capability-based operating system has some tools written in Rust.

Discord uses Rust for portions of its backend, as well as client-side video encoding,[98] to augment the core infrastructure written in Elixir.

Polkadot (cryptocurrency) is a blockchain platform written in Rust. 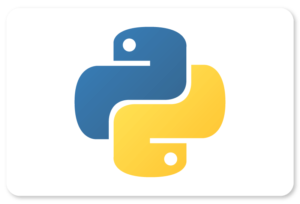 Python is an interpreted high-level general-purpose programming language. Its design philosophy emphasizes code readability with its use of significant indentation. Its language constructs as well as its object-oriented approach aim to help programmers write clear, logical code for small and large-scale projects.